10 minutes after disembarking from my supposedly 8 and 1/2 hour flight (which the wonderful Emirates aircraft made in 7.05 hours), question that pops into my brain is “Dudeee..where are the Malaysians??”  I kid you not but every second face I saw was someone from the Indian subcontinent. It wasn’t till the evening on my way back to the airport when I was given a lecture proper by the taxi driver on the history of Malaysia. Oh. Bloody British. Its just sometimes when you travel a long way away from home, the last thing you want to see are people who look…like you! (I now also understand the new tourist disappointment with Fiji)

Anyway thanks to the crew at Emirates, my 14 hour transit was now a 15 and 1/2 hour one. And it seemed it was no better time for some re-lessons. (once just doesn’t stick!)

Re-Lesson No.1 – I’m not your lets-rock-up-and-see-what’ll-happen person. I like schedules and action plans. Yet I rock up to Kuala Lumpur thinking I’ll wing it. dang dang dang danggg. I had read about the new train from the airport to the city. Could do that. Buttt..<Bags. Storage. Shower. Sleep> So. ho. hum. Bottom line I farted around a good 3 hours at the airport before I checked in a hotel. Had a nap, showered THEN took the domestic train to the city from Salak Tinggi station, where my hotel was located. Lesson learnt – Planning. Planning. Planning. (Vinaka Project Management!) 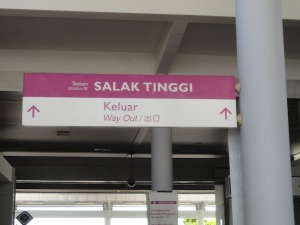 Re-Lesson No.2 – You know why I wasted 3 hours at the airport? Because my body had firmly put its foot bottom and said I need a shower. I need some rest. I need some comfort. And I want it now. Hence I just couldn’t put my bags in storage, do a day in the city, come back to the airport, grab a shower at the airport facilities and board my next flight. Oh no. This was something I’ve known for some time. I have reached an age where I simply cannot wing it either in the matters of comfort. This re-lesson happens to be the more important-er one because this tells me that the pace of the next 6 months will not be determined by my ‘pack in as much can see of the world’ itinerary but how much my body allows me. This probably is not a traveller attribute. However this is me and I’m glad I got reminded of this early before I booked any more air tickets. (*note to self – rework budget)

Re-Lesson No.3 – Stop taking the cheaper flights with longer transits thinking you’ll get to see one more city! If there is enough time, you won’t have enough energy. And if you have both, then sometimes the transit destination is just not that good!

Which is precisely what I thought of Kuala Lumpur. A train ride into the city and then another short ride on the internal monorail to the KLCC stop to the see the Petronas Towers (because I had to.) I have to admit I was pretty impressed with their transportation system really.

Quick photo shot, some not-so-authentic hotpot and back to the town of Salak Tinggi and the little village where my hotel was located. Instead of heading back into the hotel, I did a little walk around the town. Little sleepy. National elections were coming up and the politicians were not leaving any street unattended. Saw a few girls and boys in the alley doing what boys and girls do all over the world, checking each other out 🙂 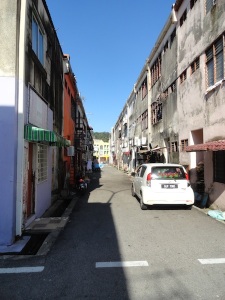 I will not lie. Headed back to the hotel and had a good cry on the pillow (hope they changed it!). It must be allowable. One cannot simply pack and move to travel foreign countries alone without feeling an acute sense of loss of their place in the world. And I am no different. Its a new kind of scared and lonely. So much so that if offered at this stage, I perhaps even might even contemplate returning back…anyhow as we humans know how. I recollect myself, get my stuff together, have another shower(!) and head out to the airport.

Sorry Kuala Lumpur, maybe we caught each other at a bad time but you didn’t appeal. Next time maybe. But thank you for the refresher on the lessons!

In hindsight – If I had planned ahead, I would  have taken KILAekspress straight from KILA to the KL Sentral and checked in a hotel near the KL Sentral. After a refresher, taken the hop-on-hop-off bus service (ticket booth at KL Sentral) and do a tour of KL sights approx. 3 hours. Get off at either China town or Little India for a meal. Back to the hotel for a nap. Check out of hotel and get on the KILAekspress which would have taken me straight back to the airport.

Both ways would cost you around RMB70 however its much cheaper than taxi fares I paid for airport transfers to and from Salak Tinggi. If flying Air Malaysia – you could check-in your flight straight from KL Sentral! …Hindsight (noun)!

One thought on “Lessons in Kuala Lumpur”