As my guide and I walked through Kumartuli and the surrounding neighborhood, she explained the residential statuses of the people living in Kolkata. A basic explanation of the hierarchy in Kolkata can be read here. Coming out of the residential area to a road along the Hooghly bank, I saw a line of delivery trucks parked on the sides. 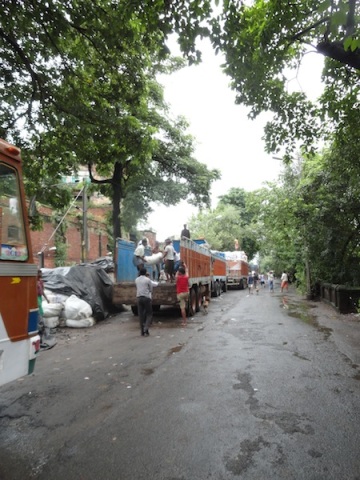 She pointed out to a team of about 10 men who were loading bundles of newspaper onto few of the trucks. She explained that most of those men came from very poor background and lived in the local slums. They collected newspapers throughout the day and sold them to buyers who would then take them to the recyclers. She then continued to explain how it was poor community that managed Kolkata’s garbage problem.

I must admit, one thing that just doesn’t sit with me well is India and its inability to handle its…waste. As a person traveling through India, one doesn’t only have to be alert for the pickpockets and the hawkers but has to fully focus on where one is walking. None of this causal stroll around the plaza or a lazy walk down the small galis. One has to step, side and dodge numerous identifiable and…some don’t-really-want-to-indentify kinds of waste matter laying on the streets. Risk diverting your attention for a minute and there you are stepping in a plop of unfinished potato curry!

Among the garage collectors of the slum community, there also is a pecking order. The more well-off collectors who have the resources actually go to more well-off communities to collect their recyclables from them directly, sort them out and then sell them to the recycling companies. The people falling further down the pecking order have to resort to going through rubbish dumps to pick out plastic bottles etc. to sell and make some little cash. In the words of my guide, “at least Kolkata’s rubbish is being looked after by the poor unlike other parts of India.” I am not exactly sure what to think of this perspective. I’m uncertain if I should be yayying for the recycling circuit in Kolkata or deplore that a certain population have to deal with it everyday, not to even make a decent pay out of it? Either way, it certainly was an interesting morning. The whole conversation got me more interested in how garbage collection works in countries like India . Here’s an excellent summary of the waste picker trade.

There are some days when I am just truly sad for India. While the new India is gleefully accepting Starbucks, Dove Shampoos and pre-packed chaats, it simply doesn’t know what to do with the paper cups and greasy foiled packets once they are empty.

Note – From the very little I have read up, apparently there are schemes etc. that are being setup/in place for Kolkata’s garbage problem. This post obviously isn’t the full representation of the problem however is a true and valid account of conversations with a local Kolkata resident.

One thought on “Recycling Kolkata”