As an on-off English teacher, occasionally in a pre-intermediate class I’d hand out a “False Friends’ worksheet. False friends are words or phrases in two languages or dialects that look or sound similar but differ significantly in meaning. It usually ends up being a ridiculously fun task and it is one of the few grammar classes that sticks with students till the end of the course! However despite teaching this and supposedly knowing better, I’m a regular victim all the time when I’m traveling. While waiting for a bus in Arequipa Peru once, I stuck a conversation with a bloke behind me. He looked miserable and apparently he had a constipando. Quite sympathetic to travel gastronomic problems (having gone through it many a time), I fished out couple of Senokot tablets from my medicine bag and offered them to the bloke. Told him, it’ll work in 12 hours or so. In broken English, he said too long…I said the bus ride was 10 hours and the bus didn’t have…toilets…but…why he need toilet?…errr….well….to go when he had to go…righttt? Constipado in Spanish means a cold. The guy had a cold – he was having terrible headaches and joint pains, he wasn’t…backed up. A roar went up in the bus! Constipation and Constipado? False Friends. Duh. 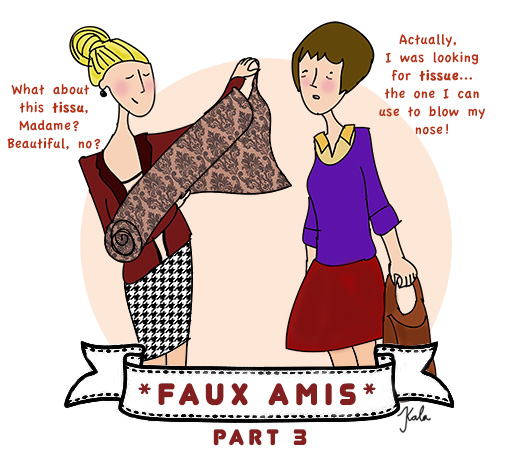 Now however this post is actually not going to be about the linguistics of the English grammar despite the above…falsely leading intro. It’s about our people friends. Friends who are false.

We Fijians over time have been subjected to a number of complexities. White supremacy complex, A 3rd world complex, a colonial complex but one we’re constantly subjected to, is from our once fellow countrymen who have chosen greener pastures overseas. Ex-Fijian citizens who feel that somehow they are better off in their new lands than those of us ‘left behind’ in Viti.

Now us gang here in the West are not only subjected to this from our overseas pariwaar but also from this population of people who live in Fiji’s big smoke called Suva. We all have those relatives from overseas who come to your house and crash for about 2 weeks, taking over your space, lounging on your couch, watching your TV, getting your mother to cook them all sorts of things jon wahan nahi miliye which would include crab curry and other expensive things we normally could afford only once every 2 months. Then they leave with over bulging bags full of daruka and nakai telling you’re welcome anytime at their place (if) when you’re over there and then these are the very same relatives who’d be busy and have ‘commitments’ should you ever make it there and take up on their offer.

We all know those kind. And then there are these friends from Suva. People who visit us in the West once every long weekend and not leave without letting us know how ‘slow’ and ‘relaxed’ and maza mein things are here. As if we are the slow critters of the nation that those important people in Suva are pulling though.

I catch up quite often with friends from Suva over coffee/drinks/lunch/dinner and often I’m told that I’m a ‘frustrated intelligent woman’ wasting in Nadi and that I need to move to Suva. In fact I’ve been made serious propositions to move from work associates, friends, ‘can-develop-into-more-than-friendship-if-I-move’ friends and unconditional support has been pledged if I ever were to move.

So a few weeks ago, I was looking for an apartment in Suva. Relators, classifieds, the usual were not providing what I was after in the time I was after. Suruj insisted that use my helplines and call up on the numerous favors/pledges that were offered from those friends if I ever was on that side of the island. Suruj and I always logger heads over this one. She thinks I need to reach out more, you know…take help. You’ve read me enough to know I don’t, dear reader. But because time was of essence, I did. I reached out to everyone who were ‘friends’.

I got a lot of ‘noteds”, a few curious ‘whatwhywho’ replies but mostly a pretended silence of ‘unread’ messages or ‘unanswered’ calls. My social media clearly indicated I was in town and reaching out so I can’t discount the benefit of doubt here. I wasn’t totally surprised and this is not going to go on a rant.

I think this post just had to go up in sharing my disappointment over how mechanical our Fijian hospitality has become towards each other. We’re too busy being virtual friends. Somewhere along the line, we’re no longer interested in knowing our friends. We want ready-made individuals who look like your friends on your social media presence but don’t want anything to do with them after the limelight. Look I understand, it’s dog-eat-dog, bites-you-back-in-the-arse-if-you-help kind of times now and all that but seriously what happened to blood pacts and langotiya yaars?

Karan Johar in his suavely sarcastic way in Luck By Chance observes that a new star gets to rise in the movie industry when a older, confident star chooses not to fill an offered a role. It’s an observation, you can say same for friendships. When you choose not to step up to the relationship, you’re offering that space to someone else.

And I guess that’s how relationships evolve, actually we evolve as persons. When our relationships fail us, it compels us to question ourselves. And I’m too old to carry these fake acquaintances and friendships. This blog is not a socialite one, I don’t do fake french air kisses and your virtual presence on my social media is only that.

But while spanish/english language false friends gaffes can be laughed away, the regret of indulging fake people is not that easy to let go.

I didn’t move to Suva (because the apartment wasn’t for me anyway) but a lot of space has been cleared. Some old friends remain dear. The kindness of strangers has astounded me once again and new, wonderful acquaintances have begun.